For most restaurants, the journey from March to December was far from a straight line.

Anne Mejia, Mellow Mushroom’s vice president of brand development, can attest to the hectic environment. But she says the 180-unit company fared better because of its pizza-based menu, increased investment in off-premises tools, and the eased restriction on liquor laws. The lunch daypart remains weak, but dinner has continued to increase as consumers grow weary of being cooped up in their houses all day.

Business restricted amid COVID spikes, but Mellow Mushroom still managed to have a successful Thanksgiving week, Mejia says. This was especially true on the day before the holiday, a time when many consumers select eating out as opposed to cooking, given the next day’s burden.

All things considered, Mellow Mushroom has solid footing as it heads into the new year. The feat was accomplished without the full breadth of its dining rooms, which are known for their art-filled vibrancy and localized culture. Mejia says the newfound distance between company and consumer necessitated a five-pronged approach to maintain engagement.

The first mission was marketing health and safety. In every guest-facing email and on all social media pages, there’s information about what to expect when entering a Mellow Mushroom. For example, customers may peruse items using a QR code or a disposable paper menu. The second measure was restructuring product development to fit guests’ needs during the unusual time, including “meals for home” packages in March and pizza making kits to entertain children home for the summer.

The next prong emphasized convenience, or a sophisticated online ordering system that facilitated takeout, delivery, and curbside pickup. Mejia says Mellow Mushroom invested in online ordering several years ago, and eventually selected Olo to build their platform. The process required some tweaks along the way.

When the brand conducted consumer research, it found that guests weren’t having a great online experience, and that it was taking a minimum of 16 keystrokes to finish their order.

“We were losing people along the way,” Mejia says. “They were abandoning course. They were finding it hard to customize their order. And they were picking up the phone instead of ordering online, which is fairly inefficient and very laborious at the restaurant level.”

With the help of Olo, Mellow Mushroom customized the platform to reduce the minimum number of keystrokes from 16 to four. Since that change, the brand saw an immediate lift in overall satisfaction scores. Mobile orders more than doubled since the end of July.

“We’re seeing that we were able to really solve a lot of the pain points for our guests,” Mejia says. “It’s been really great. The Olo team is terrific to work with and really accessible, really helpful and responsive. Our guests continue to respond really positively to what we put out there in the market.”

The fourth prong, which Mejia calls “Keeping it Mellow,” essentially comes in two parts. The first step rested on the shoulders of franchisees, who are learning to be adept at social media. Every store has its own Facebook page and most have an Instagram. That’s where customers will find pictures of staff and the pies they make. Mejia says workers at the takeout counter have newfound celebrity because they’re all over social media pages. 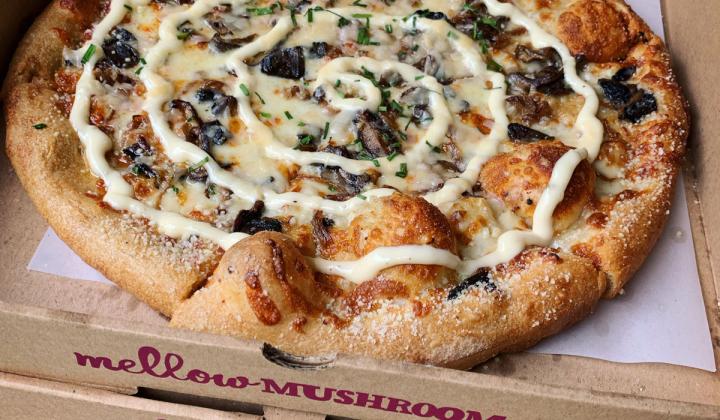 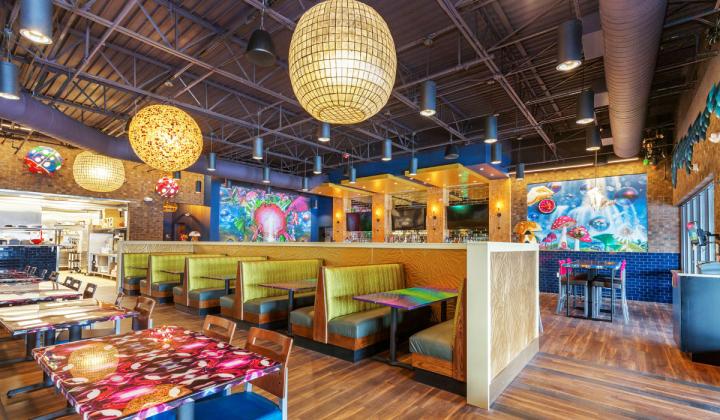 Over 10 weeks, the chain gave away more than 20,000 pizzas to 80 different organizations.

The ladder part came via “The Art of Mellow” campaign. Since most Mellow Mushrooms can only serve at 50 percent capacity, the brand wanted to bring more of the funky art directly to consumers. Every customer who orders online enters a contest to win a piece of art commissioned from more than a dozen contemporary artists. Each entry also receives a digital piece of art and is eligible to win other prizes like T-shirts, stickers, pullovers, coasters, limited edition prints, and more. Art of Mellow kicked off October 26 and runs through January 3.

“It’s been our way of saying, hey, we have a fuller experience here inside a restaurant, but let us take it outside of our restaurant and bring it to you in your house,” Mejia says.

The fifth and final bucket of customer engagement was gratitude. Mellow Mushroom put its local neighborhood culture into practice through its “A Pie for a Pie” program in which the brand donated however many pizzas it sold the previous week. Over 10 weeks, the chain gave away more than 20,000 pizzas to 80 different organizations.

“Our local Mellow store owners want to keep this going in the new year because they found it was a really effective way to connect to the folks in need in the community,” Mejia says.

As Mellow Mushroom worked meticulously to maintain its connection with customers, there wasn’t much room for new product news. The brand was working on a pipeline of food and beverage products earlier this year, but it was forced to pivot when COVID arrived. But as more dining rooms reopened and consumers returned, innovation became re-energized.

In the fall, the concept rolled out six new cocktails, including the Peach Buzz, made with Jameson Irish whiskey, Monin peach purée, fresh lime, topped with Earl Grey bitters from 18.21 Bitters, and Sunset in Paradise, a concoction filled with Bacardi Superior Rum, Monin coconut and pomegranate syrups, pineapple and fresh sour, garnished with toasted coconut and a fresh pineapple wedge. 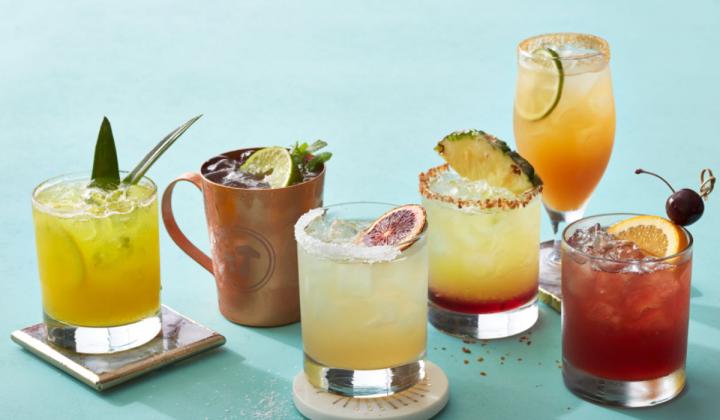 “We have looked at every single product on our beverage menu, and so we were reducing costs on what we were offering because we not only have fabulous craft beer and local craft beer, but we also have a wonderful handcrafted cocktail program,” Mejia says. “And so we said, well, as we reopen these dining rooms, our operators have to retool their bars anyway and they’re going to have to retrain their staff or even hire new bar staff anyway, so the time is just right for this.”

For the food side of things, Mellow Mushroom decided to take the best of the spring menu that never launched and combine it with the November menu. New items include the Avocado Smash, Teriyaki Wings, Elevated Cobb Salad, Mellow Chick Salad, Backyard BBQ Pie, Wild in Havana Pie-Jerk, and Havana Hoagie. In addition to that release, Mellow Mushroom deleted a number of offerings that weren’t selling well. Mejia says the new food and beverage items were a way to let customers know that Mellow Mushroom was still humming along despite the pandemic.

The brand also couldn’t let too much time pass because of its multi-layered development process.

“So what’s going on from a sales standpoint?” Mejia says, describing the process. “What isn’t moving? Then we talk to our operators and really hear from them. What’re their points of pain with menu products? What’s causing the issue? What isn’t moving from an ingredients standpoint? We then pore through all of the guest data that we have—all of the surveys. What are we hearing about the actual products? And in some cases, for some of the stuff that’s further up the pipeline, I went back and asked our team to really look at some of the fundamental ingredients. So hopefully later, in 2021 or maybe early 2022, some of that will come to fruition.”

Once the brand has all of those data points, it looks toward the trends in the marketplace—what appears to be fads, what seems to be more long-term, and most importantly, what fits Mellow Mushroom the best. All of those thoughts are organized into one place, and the brand proceeds to decide the flavors, proteins, and vegetables it wants the test kitchen to execute. Then it becomes a question of making the economics and supply chain work.

If all those boxes are checked, Mellow Mushroom sends the information to franchisees so guests can determine what the winners are.

“We might have something that guests love, but if our franchise operators can’t execute it time and time again, then we’re not going to go to market with it,” Mejia says. “That’s our practice. With our last two menu launches, it’s served us really well. The secret for us is to really engage the local Mellow store owner and really listen to what they have to say. That really helps guide us when we’re getting to take these ideas and put them into the marketplace.”

Thanks to its maneuvering in the past nine months, Mejia fully expects the brand to serve customers across more channels than it ever has before.

Amid the chaos, she’s predicting a pretty Mellow winter.