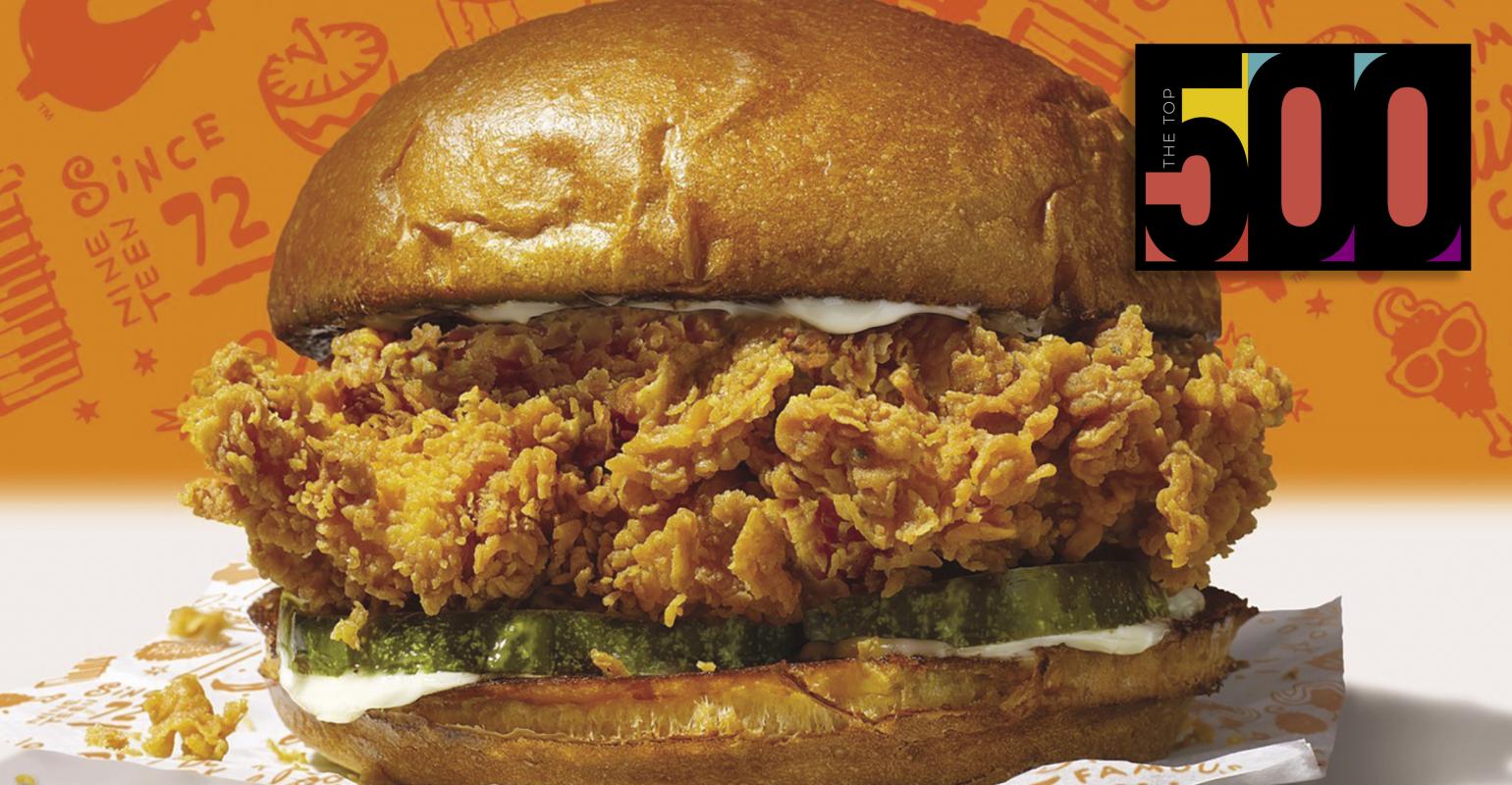 The year of chicken restaurants Sandwiches, wings and tech-savvy leadership drove the segment’s success — along with a commitment to corporate culture

Chicken — beloved, affordable and portable — has proved to be a popular go-to item during the pandemic, especially in the form of wings and fried chicken sandwiches. During the toughest year in modern history for restaurants, sales at those specializing in chicken grew on average by 5.2%.

Most of the fastest growing chains already had the technology and other systems in place to adapt to the changing needs of their customers as the pandemic hit.

Wingstop, which grew its system by more than 10% with 128 new locations — and which saw sales soar by 21% — had long been a technology leader, with 40% of its sales coming via digital orders at the beginning of 2020. By the end of the year, digital orders accounted for 60% of sales, the company reported.

Dallas-based Wingstop also had a strong corporate culture in place that helped it succeed, according to Donnie Upshaw, the chain’s senior vice president for people. He told Nation’s Restaurant News earlier this year that “The Wingstop Way” — the chain’s core values of being service-minded, authentic, entrepreneurial and fun — have helped guide it through the pandemic.

“Although we had built ‘The Wingstop Way’ to guide our behaviors and actions and serve as criteria when seeking new talent, we quickly found that we essentially prebuilt a culture that even a pandemic couldn’t shake,” he said.

Jim Stevens, president of Golden Chick, based in Dallas, said corporate culture also helped that chain rebound from a sales decline of 15% in the early weeks of the pandemic to a year of 13.3% sales growth, as the chain opened 18 restaurants, growing its system by nearly 10%.

As the pandemic hit, Golden Chick’s executives took around $600,000 in pay cuts rather than laying off staff.

“We announced it to the entire support center team and we had several individuals at the manager and director level volunteer to take salary cuts as well,” he said. “We received a lot of loyalty and goodwill from our people through that whole process.”

Everyone was back to their full pay levels within 90 days, Stevens added. 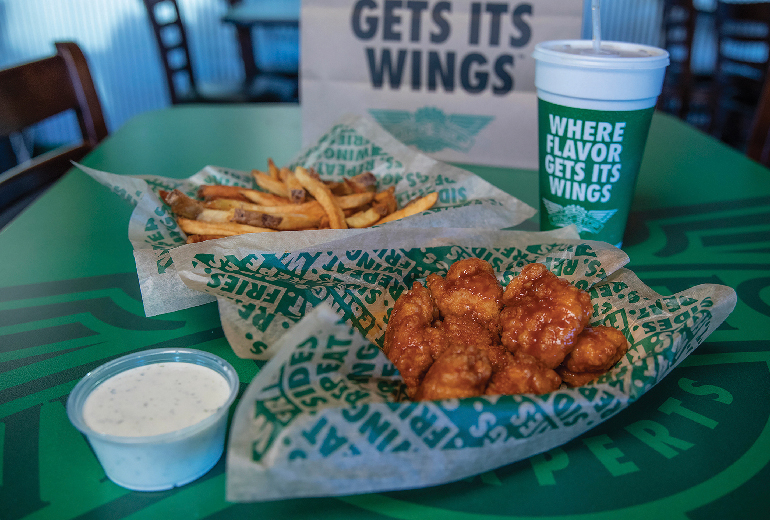 Wingstop grew its system by more than 10% with 128 new locations.

Golden Chick also accelerated the rollout of its Big and Golden Chicken Sandwich, which it launched in time for Memorial Day. Then, when the Texas State Fair was canceled, the chain teamed up with Fletcher’s American Corny Dogs — a staple of the fair — and sold them out of its drive-thrus instead. In eight weeks, the brand sold 500,000 of the corndogs, boosting September sales of the 88 Golden Chick locations in the Dallas-Fort Worth area by 62%.

“So we were glad we put that on the menu,” he said.

Golden Chick has had such a successful year that the chain has already achieved its goal set for 2030, that being average unit volumes of $1.3 million. In fact, new locations are seeing annual sales as high as $1.6 million, Stevens said, adding that the company was on pace to exceed its goal of having 500 locations by 2030.

The runaway success of the regular and spicy sandwiches drove sales over the course of 2020, with average unit volumes rising by $400,000 between the fall of 2019 and the fourth quarter of 2020, according to Toronto-based parent company Restaurant Brands International.

Atlanta-based Chick-fil-A, whose straightforward sandwich of brined fried chicken with pickle chips on a bun is the one on which other fried chicken sandwiches are loosely or closely modeled, had a respectable year with a sales increase of 3.8% on an already high baseline of more than $10 billion. It opened a net 19 locations, an increase of 0.7%.

Yum Brands subsidiary KFC closed a net 74 units last year, 1.8% of the total, but still saw a sales bump of 4% as it launched a new chicken sandwich in the spring and improved drive-thru service times by 16 seconds.

Slim Chickens, a tender and wing specialist based in Fayetteville, Ark., had a strong year, with sales up by 7.6% and nine new restaurants opening, giving it a total of 90 units.

Tom Gordon, the chain’s co-founder and CEO, said the company had started investing in an app and online ordering in 2017.

“We felt like, eventually for our industry, having an app was going to be table stakes,” he said.

“It was kind of early [to start in 2017], and was expensive for us, but looking back I’m really glad we did it then because we were ready for COVID.”

Slim Chickens also reacted quickly as the pandemic spread. Chief marketing officer Chris Allison proposed on March 23 that the chain pick up media placements that other brands were dropping to advertise the fact that Slim Chickens was still open and ready for takeout and delivery, Gordon said.

“That was an integral part to our success,” he said. 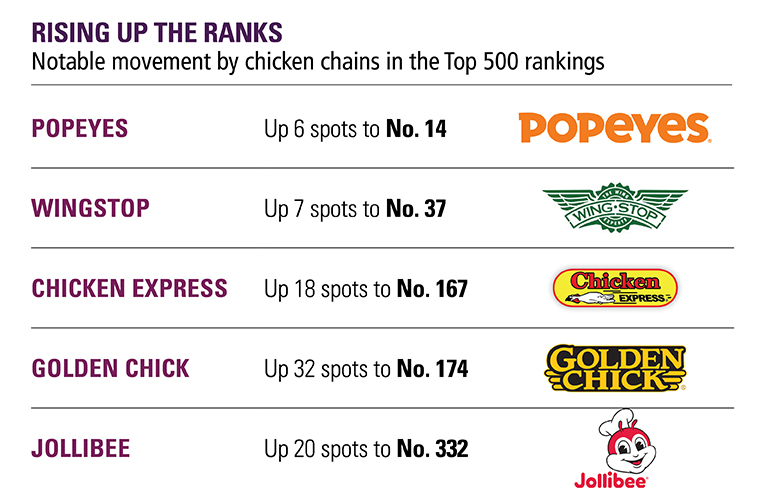 Of course, not all chicken chains did well. Boston Market closed 10% of its restaurants in 2019, was sold in late April of 2020 and, despite innovations in the late-night daypart last fall, saw sales drop by 13% as it closed another 45 locations — 11.5% of the total.

El Pollo Loco, with its heavy concentration of restaurants in hard-hit Southern California, saw sales decline by 6% for the year, much of which it spent upgrading its digital technology.

Church’s Chicken also had a challenging year, with sales down 5.6% as it closed 30 restaurants, just over 3% of its total system.