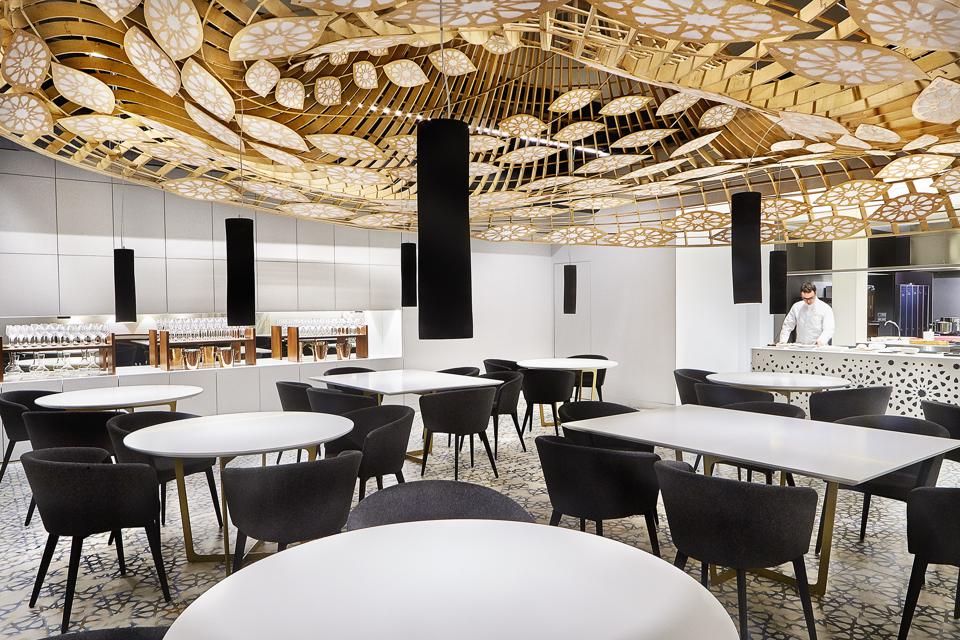 These 10 places (in alphabetical order) are where these experts will send their friends whenever we can travel again.

“Atomix uses the wide range of Korean techniques to bring ingredients foreign and familiar to new heights,” says Invernizzi. “Every dish is introduced by a card that describes the Korean origin of the ingredients and enlightens the guest about how well rooted Atomix’s new ideas are in a centuries-long culinary tradition. Wagyu, foie gras and mole sauce may not scream ‘Seoul,’ but they are the new vehicles to deliver gentle flavors and surprisingly refreshing dishes. Chefs JP and Hasung’s masterful storytelling will take you on a very unique journey.”

“Rodolfo Guzmán is a unique chef, and had Boragó not been situated in Santiago— literally at the very end of the world—but instead in Europe or the US, and he not been such a modest man, then Boragó would have been on everyone’s lips and at the very top of every ranking list around,” says Brask Thomsen. [Though it just jump up to number 6 on the new Latin America’s 50 Best last week.] for “Boragó can be considered the Noma of South America, though solely on its own terms and, up until recently, the undiscovered terroir of its ingredients. (Chile is the rough Nordics of Latin America.) Guzmán introduces Chilean ingredients, products and techniques to the world for the first time while literally rewriting his country’s culinary rulebook. Boragó’s menu is super-micro-seasonal, and you taste almost supernatural products you’ve never heard about before, executed with intelligence, boldness and beauty.”

“In one of the most ‘dolce vita’ islands of the Mediterranean, surrounded by a garden that could only be found in fairytale, chef Nino di Costanzo seduces his guests with his innovative vision about the very best ingredients and suggestions of the Campania region elevated to the finest culinary art,” says Invernizzi. “Art is everywhere at Dani Mason, from the one-off plates to the modern paintings on walls, from the circus dessert display to the object trove in the garden.”

“This is one of the most beautiful restaurants I have ever visited,” says Huber. “Once you find the entrance, tucked away in the quiet streets of Higashiyama Chaya (one of the geisha districts of Kanazawa) you enter a narrow pathway that opens onto a beautiful garden. Then you need to find the door, which is not full size, so even short people need to bow. When you make it inside, you find an awe-inspiring space with counter seats and two tables. The architecture is pure and refined, and the kitchen is so small that it would fit into a studio apartment. There are up to four chefs, led by Mr. Imai. Their cuisine is a modern take on the traditional kaiseki. The dishes are simple but daring; the combination of flavors is inspired; the execution, perfect.”

“The Faroe Islands are an ancient microcosmos of exciting products, Nordic history, Viking tales, 37 words for fog and even more for fermented produce, 70,000 sheep, a thriving fishing industry, ravishing waterfalls, eccentric personalities, a native tongue only spoken by some 50,000—and then they have the culinary pearl, KOKS,” says Brask Thomsen, who has made the restaurant the centerpiece of his second culinary film, Michelin Stars II, in production now. “KOKS is an almost mythological place in a hobbit setting; a two-star Michelin restaurant situated in a low-ceilinged farmhouse with grass on the roof, at the corner of luscious green fields surrounded by rolling hills and a lake filled with trout, isolated on an archipelago in the middle of the Nordic Seas. KOKS is a restaurant not only trying to be or show sustainability but living it at its core. A vast majority of the produce is sourced within a few miles of the restaurant, in the surrounding hills and ocean. Working with small producers and personally acquainted scallop divers, seaweed experts, hunters and fishermen, KOKS is a boundless depth of pristine culinary beauty.”

“What makes Noor (‘light’ in Arabic) hyper-interesting is the culinary history lesson that chef Paco Morales offers in Córdoba’s Moorish heritage from the 10th to the 15th century, when Andalusia was known as Al-Ándalus under Arabic rule,” says Brask Thomsen. “Although Noor is located in the working-class suburb where Morales grew up, you practically feel like you’re sitting in a house in the middle of Sahara a thousand years ago. The cuisine has a similar inspiration, with modern culinary techniques combining with the flavors, aromas and subtleties of dishes from the past. Like a culinary Indiana Jones, Morales recovers, studies and shapes a new epicurean language from the ruins of a prosperous Spanish-Arabic past.” (Disclosure: Brask Thomsen provides communications assistance to a small group of restaurants in which he strongly believes, and Noor is among them.)

“Brooklyn Fare meets the Austrian Alps!” enthuses Huber. “Max Natmessnig cooked for four and a half years for César Ramirez in one of the best restaurants in the Western Hemisphere, Chef’s Table at Brooklyn Fare. When he moved to the Alps, he intelligently translated his learnings into his new environment. The result is simply the best restaurant in Austria. It all starts with his ingredients, sourced mostly from the west of Austria, from selected suppliers. His creativity and fine calibrated palate enable him to create phenomenal dishes. All of this embedded in Austrian hospitality and casual easiness makes this meal an extraordinary experience.”

“In a reconstructed old house in the center of Bangkok, the flavors of Khun Ice and Chef Yod bring us down to the southernmost regions of Thailand, where spicy dishes with an occasional Muslim influence create the base for a truly unique experience,” says Invernizzi. “The open-air kitchen, nestled in a tropical garden, uses only southern ingredients to elevate the traditions and introduce the guests to a new understanding of what contemporary Thai cuisine has the potential to offer.”

“An intimate restaurant where curved lines and soft lights are some of the tricks that King Bruno uses to please your senses with perfectly executed dishes he creates using only sustainable ingredients,” says Invernizzi. “He is the personification of the French chef and his big charisma. His even bigger heart welcomes each guest and makes them feel special. It’s a place to heal with food and smiles.”

“Sometimes even I get surprised,” admits Huber. “There we were, traveling up the east coast of Great Britain, arriving at an old manor house in the middle of nowhere for lunch. I had no clue what to expect. And then there was Gareth Ward, a North English natural phenomenon. He and his young team took over the Manor House Ynyshir and converted it from a hotel with a restaurant, to a restaurant with rooms. The only choice he offers to his guests in his tasting-menu-only restaurant is the location of where to eat. There’s a dining room with five tables, a communal table for 10 people in the kitchen and the Pass Bench, an elevated bench for two, right in the middle of the action. Once Ward starts his full-on assault with his 20-course menu, you just need to lean back and indulge. His food is ingredient driven, with a heavy emphasis on meat, melting local and Japanese influences into a flavor thunderstorm. Some of his dishes are super-creative and somewhat molecular, but always perfectly executed.”

Back Kitchen Table at Osso, Lima